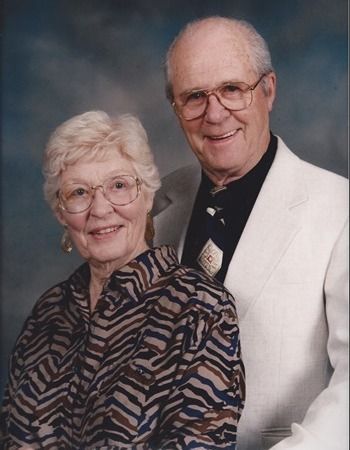 “My father and mother farmed two miles west of Francis and also lived in Sedley. I was born in 1918 and went to elementary school in Sedley and Francis. I completed high school at Campion College in Regina.

My father passed away in 1932, so I started farming at an early age with my mother.

I attended the University of Saskatchewan in Saskatoon where I took agriculture, graduating in 1946. While at the U of S, I joined the Wrestling and Boxing Clubs and the U of S Agro Hockey team. Hockey was a favourite pastime. I played on the Francis and Sedley teams for many years, including the “Old Timers Team”.

In 1955 I married Vera Stewart (formerly Liberty). Vera was employed with a chartered accountant firm for 14 years. We farmed in the summer and both worked in Regina and Vancouver for several winters. In the fall of 1963 we took up residence on Broadway Street in Sedley where we have resided for the last 30 years, commuting to the farm.

In the past several years we have been spending our winter months in the USA and in our retirement planned to return each fall to our winter residence in Mesa, Arizona (the Good Lord willing).