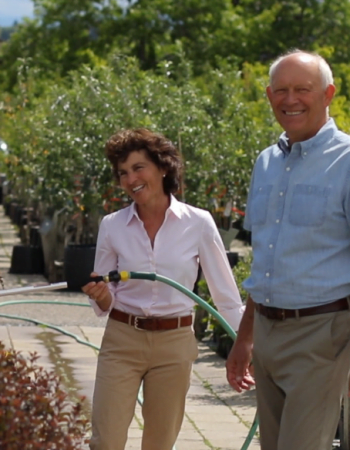 Maria Byland Story – In February of 2016, Maria Byland and her husband John attended a late afternoon dance lesson, did some errands for the family business, Bylands Garden Centre, and had dinner out before heading home around 7:30 pm. It was while they were running errands that Maria first commented about her sore back.

The pain increased so she took some Advil, but after half an hour the pain did not subside and got worse. She began pacing around the house in extreme discomfort, going out for fresh air and then started to pant and moan. She asked John to call 911.

“After describing the symptoms, I was immediately instructed to get two aspirin, have Maria chew them not swallow them, and to stay by her and stay on the line,” explained John. “We live right across from the Fire Hall and I was able to watch the fire truck leave the hall and drive up the driveway. We knew most of the firemen, as over the years many had worked for us, and they quickly put Maria on a monitor and waited for the ambulance to arrive.”

The ambulance arrived a few minutes later. EMTs observed that her heartbeat was fast and irregular and took her to the hospital. John drove separately and as he was waiting to check Maria in he heard a ‘Code Blue’ in the Emergency Department. He didn’t know it at the time, but that Code Blue was for Maria.

Maria was in cardiac arrest. Her heart’s ‘electricity’ malfunctioned and drove her heart rate through the roof. She was administered CPR and paddles until her heart miraculously started beating again.

“The ambulance attendant was still waiting when I came into ER,” says John, “and mentioned that what happened to Maria was one of the craziest things he had ever experienced. Had 9-1-1 not been called when we did or if this had happened in a remote area, Maria would not be here today.”

Although Maria and John had been through a lot by this point, the coming weeks would test their strength in ways they never knew possible. After several tests and exams by cardiologists it was determined that Maria needed to go to either Vancouver or Victoria for a cardiac ablation and/or to have an ICD implanted. It took her 13 days to be finally flown to Victoria via air ambulance due to lack of beds, poor weather or other priorities. The waiting and uncertainty took its toll on Maria, not to mention the burden on the system because of the delays.

“Luckily, I had no heart damage but I was placed on heart monitors and was restricted to stay in bed for 4 days not even being able to go to the washroom. I forced myself to have positive thoughts so I could have a quicker recovery. I was told that I would be going by air ambulance next Monday or Tuesday and that I had been scheduled for the procedures to be done on Wednesday. I found it surprising that we could have open heart surgery in Kelowna but could not have the procedure I needed done here in Kelowna.

Monday came and the air ambulance could not fly out because of bad weather, Tuesday there was an emergency that the air ambulance had to deal with. Wednesday came and I did not go because there was no longer a bed for me in Victoria’s Jubilee Hospital. Thursday came and I was told that I would be going so our daughter flew to Victoria from Toronto and my husband flew from Kelowna that afternoon. I did not make it to Victoria that day and by now we figured that I would not make it there for the weekend so Melanie and John flew back to Kelowna. This was very stressful for all of us. I spent the next six days waiting everyday to be called to Victoria. I was very emotional and all the positive thoughts I tried to keep in my head were not working. I had a few breakdown moments.

It was hard for me to be cooped up in a hospital for so long when I know that if I’d gone to Victoria on the planned date it would have been easier and less stressful on all our family. It would have cost the medical system less money and my recovery time would be quicker. I would have not tied up a hospital bed for almost three weeks when in fact I could have been in and out in less time.”

Thanks to the Advanced Heart Rhythm Campaind, electrophysiology is now available at KGH. Patients like Maria experiencing urgent, life-threatening complications arising from abnormal heart rhythms or cardiac arrhythmias will be able to receive the treatment they need, right here at KGH.