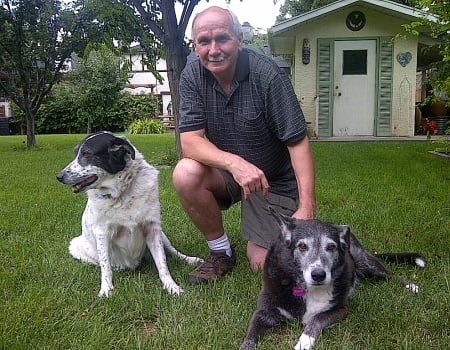 When a seemingly healthy, vibrant employee is suddenly struck by critical illness, for a tight knit local business group it can be the spark to initiate a fundraising campaign to give back to the community in a meaningful way.

Such was the case for Kelowna’s Johnston Auto Group BMW.  General Manager, Gord Hayes, recently presented the KGH Foundation with a gift of $15,000. The donation was inspired by one of their own, and will go toward the purchase of state-of-the-art medical equipment and patient care items for the cardiac program at Kelowna General Hospital.

When 55-year old Ron Russell awoke on the morning of January 17, 2016, he felt off, but decided to go about his day any way.  The full-time Service Manager of Vernon Dodge Jeep, part of the Johnston Auto Group, had no reason to believe that he was having a heart attack.  After all, he was an active curler and maintained a healthy lifestyle.

But that evening, he knew something was wrong.  “When I began sweating profusely for the second time that day, I jumped in my truck and headed to the hospital,” says Ron.  “I really didn’t believe I was ill at all.  I will admit though, that for maybe 3 – 4 months I had been feeling a bit of pressure in my chest.”

Indeed, Ron was sick.  After checking himself into Vernon Jubilee Hospital, he was transferred to KGH to await open heart surgery.  One of his arteries was 90% blocked and another was 65% blocked.  Ron was scheduled for a double by-pass, a surgical procedure to circumnavigate the diseased sections of Ron’s coronary arteries with healthy artery or vein grafts and re-establish a healthy flow of blood to his heart muscle tissue.

“Ron is such a great guy and has been a manager with our group since 1992. We were so happy to have him back to his active, healthy self, thanks to the extraordinary care he received at KGH,” says Hayes.  “We felt very motivated support him by making a donation to cardiac care.”

Throughout the month of April, a portion of the funds from the sale of each new or used vehicle purchased at the dealership was committed to KGH.

“Kelowna BMW is a generous supporter and fantastic corporate partner,” says Siobhan McManus, Senior Development Officer at the KGH Foundation.  “Together, they have helped make world-class, state of the art cardiac care possible locally at KGH, and save lives.”

The cardiac program at KGH has grown tremendously since 2009 when the first percutaneous coronary intervention (PCI), or angioplasty, was successfully completed.  Since then thousands of stent placements have been performed, over 1,900 in 2015 alone, dramatically improving the quality of life for cardiac patients.  In 2012, KGH launched the cardiac surgery program and now performs hundreds of procedures annually, including open-heart coronary artery bypass grafts and heart valve replacements.

The new Interior Heart and Surgical Centre opened its doors in 2015, and with it, a significant step forward in advancing cardiac care at KGH.

Donors continue to play a critical role in financing the equipment and patient care needs of the IHSC beyond what the province can supply.

“It’s a place you hope you never end up in, but sometimes you do.  Very unexpectedly,” reflects Ron.  “The cardiac care at KGH is outstanding.  I am incredibly grateful.”