KELOWNA, BC – December 20, 2021.  The well-respected, community-minded owners of the Kelowna-based City Furniture chain have given a gift to the KGH Foundation’s Guru Nanak Dev Ji Endowment Fund as the Sikh community continues to celebrate a monumental anniversary in the Guru Nanak tradition. 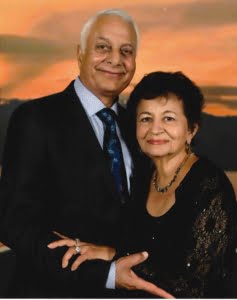 Ray and Kay Kandola, owners of City Furniture, have given a gift to the KGH Foundation’s Guru Nanak Dev Ji Endowment Fund.

Ray and Kay Kandola chose to support the Guru Nanak Dev Ji Endowment Fund, which was established by the family of Akaljot (AJ) Gill together with the Sikh community in 2019, in honour of the 550th Anniversary of the Guru Nanak Dev Ji. Guru Nanak Dev Ji is the first Guru of 10 Sikh Gurus and is the founder of the Sikhism religion. Guru Nanak is said to have travelled far and wide across Asia teaching people the message of ik onkar (ੴ, ‘one God’), who dwells in every one of his creations and constitutes the eternal Truth.[2] With this concept, he would set up a unique spiritual, social, and political platform based on equality, fraternal love, goodness, and virtue. He founded three pillars of Sikhism namely Naam Japna, Kirat Karni, and Vand Chakna (attain unity with God, honest livelihood, sharing what you have with others).

“It is an honour to be able to give this gift in the name of Guru Nanak,” says Ray Kandola, who, with his wife, Kay, also recently gave a gift in support of advanced stroke care at Kelowna General Hospital.  “We are proud of our Sikh heritage. We hope this gift will inspire others in our community to also support the Guru Nanak Dev Ji Endowment Fund.

Donations to the Guru Nanak Dev Ji Endowment Fund will be used primarily to purchase equipment, surgical instruments, fund research or purchase other medical equipment and patient comforts, or other related areas in the Kelowna General Hospital involved with the care and treatment of patients.

Kandola is the co-founder and president of City Furniture & Appliances, which was first established in 1976 and now has 23 locations across BC and Alberta including the local store in West Kelowna. Each City Furniture location is locally owned and owner-operated with a community-driven, family-focused approach.

Under Kandola’s leadership, City Furniture Group takes pride in giving back to their community and supporting local charities. Kandola himself is a past president of the Peachland Rotary (2019).  That year, the club joined forces with the Peachland Lions Club and Peachland Sportsmen’s Association to raise funds and build the Ray Kandola Heritage Pier, 120-meter, multi-use, wheelchair-accessible pier in downtown Peachland alongside Heritage Park.  Kandola continues to remain involved with Peachland Rotary as an active volunteer.

“Ray and Kay are really outstanding leaders in our community, not only as business owners but because they choose to give so much back,” says Gary Rozak, KGH Foundation Director of Philanthropy  “They are truly stewards of excellence in the health and well being of all of us who call the southern interior home.”

For more information or to give a gift to the Guru Nanak Dev Ji Endowment Fund, please contact Gary Rozak at 250-862-4438 or email [email protected].

Since 1978, the KGH Foundation has worked with a generous community to raise funds to support world-class healthcare close to home for a rapidly expanding and diverse population in the interior of BC.  Today, the KGH Foundation is the lead fundraising organization for Kelowna General Hospital and its associated facilities, JoeAnna’s House, and Central Okanagan Hospice House.