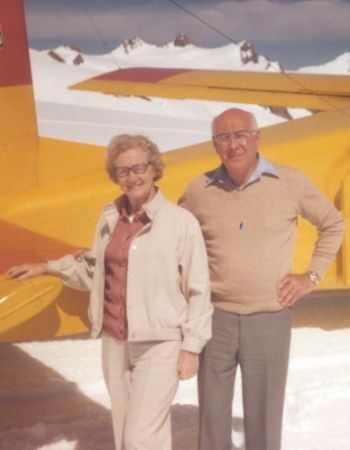 Dora was born on April 2, 1918, in Mikado, Saskatchewan.  She was a descendant from Irish and Scottish families that had immigrated to Canada.  Dora was educated and trained as a school teacher and taught school, to a variety of grade levels, for 20 years.  She met her future husband, George, at Sylvan Lake, Alberta, in the early 1950’s and the couple were married on October 1, 1954, in Red Deer, Alberta.

George was born on October 29, 1918, in Lethbridge, Alberta.  His parents had immigrated from France several years before and George was their fourth child.  The family lived happily in Lethbridge and George grew up to try his hand at a variety of different pursuits, including farming.

George continued his part-time farming business while at the same time maintaining his interest in a variety of other enterprises.  Following his marriage to Dora, the couple spent many happy years on their farm at Sylvan Lake.  In 1978 the couple left Alberta and retired to Kelowna, British Columbia.

George and Dora had a special interest in travelling and exploring the world.  During their years together, the couple travelled to 34 different countries.  Favorite destinations included Spain, Thailand and New Zealand.

Dora passed away in February, 1996, in Kelowna, B.C.  In recognition of the many happy years that the couple shared in this community, George decided to create the Rozier Fund, through the Foundation, in order to support KGH and health care services in the Central Okanagan.  The Rozier Fund will benefit patients, and their families, in the Kelowna area for many generations to come.