As I write this, my hands are shaking. It’s not an easy story to tell. But together with my family, I believe it’s important to do so. Because it’s only through the telling that we can begin to have the important conversations about mental health, and what it is that drives young people to feel such pain and despair that they feel their only choice is to disappear.

In many ways, Georgia’s is an unremarkable story. And yet, like every individual life, it is a unique story of beauty and love and struggle. Like all of you who are parents, from the day my daughter was born, I believed she was the most beautiful thing ever created.

As soon as she could crawl Georgia was curious, strong-willed, independent. She was smart, funny, quick to smile, and always insisted on marching to her own beat.

She had lots of friends, worked hard, did well in school.

She was surrounded by love all her life.

So, in a word, Georgia was pretty normal.

But maybe it’s best if I let Georgia tell you about herself in her own words. In the note she left us, this is what she wanted us to know: 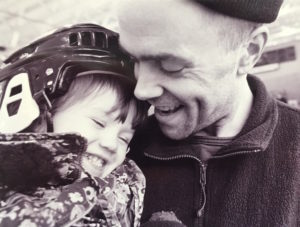 As she grew into a young woman, Georgia had a burning desire to make a difference in the world. Her goal in life was to help women and children and the less fortunate. She was about to set out on that path – an eight-month humanitarian trip to Africa – a few months after she graduated from Kelowna Secondary School.

She came to me the morning she was to fly out and told me she didn’t know if she could go. She told us she had been struggling for a few months. She revealed that she was having suicidal thoughts. Until then, we had no idea the extent of Georgia’s struggles. We chalked her behavior up to nerves, and to the mercurial behavior of a hormonal teenager.

Georgia didn’t get on the plane that day. And so began a year of indescribable pain and struggle for our entire family. Georgia was diagnosed relatively quickly with depression and anxiety. With some knowledge of the health care system, and friends who worked in it, we thought we would be able to get her the help she needed.

But even with this experience, the journey to find help was incredibly long and frustrating – a journey made more difficult because Georgia fell through a great, yawning chasm in the system. It’s difficult enough to navigate an overtaxed system with multiple different agencies, programs and processes. But for an 18-year-old transitioning from youth to adulthood, there is a specific and curious gap.
She was sent to the youth system and told she was too old. She was punted to the adult system and told she was too young. She cycled through a handful of counselors in both the public and private systems. No one seemed to be talking to one another, sharing information, working as a team.

After months of this, things did start to look up. Georgia finally found a counselor who worked for her. She found a doctor who cared for her. She learned about support groups that might help her. She started to feel optimistic.

But the support groups were oversubscribed. She was put on a wait list. She spent three months in limbo, and she began to despair.
A crisis in September landed her in Kelowna General Hospital where she was given a third diagnosis, put on a waiting list for a third support group, and sent home.

Georgia took her own life a week later. She was on three waiting lists when she died.
***
Mental illness is a disease that will affect 1 in 5 youth. Only 25 per cent of those who suffer will get the help they need. And the thing about mental illness is, you don’t know who it will strike or when. But the fact is, mental illness affects us all. Perhaps some of you have struggled personally, perhaps you have loved ones who are struggling.

Like cancer, it is a disease that touches everyone in our society at some point, in some form or other.

But unlike cancer and many other diseases of the body, the system to treat and manage mental illness is splintered, disconnected, and inadequate. Perhaps most discouraging is the stigma of the illness, and the resistance from many corners to even talking about it.

In Georgia’s note to us, she had a simple request: Please tell the truth about why I died. We need to open up the conversation.

My hands continue to shake as I write this. But I’m telling Georgia’s story because I believe the only way we can start to find solutions is to start talking.

I mentioned at the beginning that Georgia was surrounded by love all her life.

When she died, she was all alone.

My greatest hope is that no one ever needs to feel alone again, even when they’re by themselves.

Nicholas' Story A pre-med student at UBC-O, talented goalie for the Okanagan Heat, good looks and a loving family. B

Abbie's Story We discovered Abbie’s work on Instagram. Within a few seconds we knew she would be our campaign p

Veerle’s Story After surviving two earthquakes in New Zealand, a Kelowna teen shares her story about living with PT

Finnegan's Story Bright, earnest and expressive, at 14, Finnegan Pihl speaks with a sense of clarity far beyond his y
See All Stories